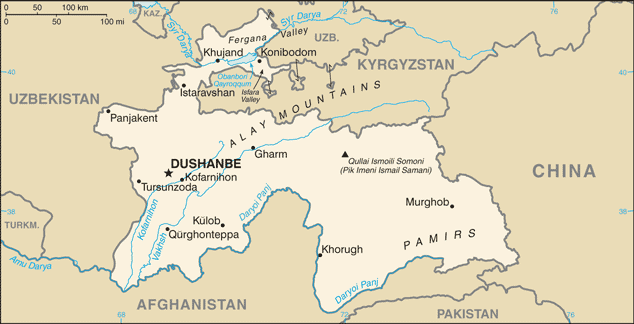 The issue of bonds by Tajikistan this month follows on from recent low quality bond issues from Argentina, Greece and Iraq. Emerging market debt investors piled into the offering allowing the nation to issue US$500 million of ten year bonds at 7.125%. Investors who bought in cited the yield on offer and diversification as reasons to invest. For the B- rated (Standard & Poor’s) nation, with annual GDP of only $6.95 billion and no history of selling bonds, this issue is a big deal.

Tajikistan is amongst the poorest nations in Asia with annual GDP per capita of $968. The largest foreign income source is believed to be the drug trade as the nation shares a border with the world’s largest producer of opiates, Afghanistan. Expatriate workers in Russia are also a solid source of foreign currency. The main industry is an aluminium smelter, though the country itself has no bauxite to mine and is reliant upon imports. The need for large amounts of electricity to produce the aluminium is key to the purported purpose for the issue.

In the weeks before the issue, Tajik officials presented to potential investors. The first slide was map showing where the country sits, which is fitting as the country hasn’t issued bonds before with existing debt from China, the World Bank, the Asian Development Bank and the IMF. At a cost of $3.9 billion, the country is planning to build a hydro-electric power plant and the world’s tallest dam, with the project forecast to be completed in 2032. Fifteen years to build a dam and power plant might seem excessive, but construction works have started and stopped several times since 1976. The basic maths has the debt maturing five years before the project is due to be fully operational and the proceeds forming less than 13% of the overall funding with minimal other funds committed for the build.

The presentation to investors also included ten slides on the potential risks of the bonds and investing in Tajikistan. These include; the potential for social unrest in what is considered a dictatorship marked by cronyism and corruption, reliance upon good relationships with Russia and Uzbekistan (neighbouring Uzbekistan objects to the dam as it will change waterflows for its cotton industry), a weak banking system, very low levels of foreign reserves, relatively high debt to GDP for such a poor nation and the economic reliance on the drug trade.

In normal times, the above list of risks would have excluded Tajikistan from public financing with only friendly nations like Russia and China or development institutions willing to provide any funding. However, yield starved investors are willing to ignore almost any risk these days to chase just a little bit more yield. Ukraine (also B- rated) has just sold $3 billion of fifteen year bonds, less than two years since it gave bondholders a 20% haircut on their debts.

For Tajikistan’s bondholders, the potential pathways to default are obvious and many. The funds could be squandered by the nation’s president. The president could be forced out by a popular uprising with debts incurred by the prior regime repudiated. The dam may never be built, or might stall part way through due to cost overruns, technical difficulties or lack of funding. Neighbouring Uzbekistan might take military action to ensure water flows aren’t impeded. Russian and Chinese investment might dry up. The US might get sick of the drug trade and place sanctions on Afghanistan and Tajikistan. Tajikistan might exhaust the patience of its creditors and be unable to rollover its debts. Given all of these obvious risks, would you lend to Tajikistan?