In the wake of the VIX spike and bust up of roughly a dozen inverse volatility products this month, there’s been plenty of people criticising short volatility strategies. Harvard has been singled out as it was one of the largest holders of XIV, an exchange traded note that has been liquidated after a near wipe-out. Much of the criticism has been misguided and uniformed; by people who don’t understand the range of short volatility strategies available and the risk management that goes with properly using them. If correctly managed, short volatility strategies have a history of producing outsized returns. They should arguably form a small portion of the overall investment portfolio of most institutional clients.

What is Short Volatility?

Short volatility strategies are investments that benefit from a low volatility environment. The most obvious category is selling put and call options, with the option seller hoping that stock prices stay the same and they can collect the option premium without needing to make any payout. Option sellers have limited upside (the premium) but potentially unlimited downside on a payout and are essentially insurance providers. Exchange traded notes and funds like XIV and SVXY replicate option selling but in a format easily available for ordinary investors.

In a wider sense, asset classes like credit and businesses based on lending and insurance can also be considered to be short volatility. These activities involve analysing risks and calculating whether the premium offered is sufficient to cover the risk involved. For a bank, a stable economy is preferred as there will be few losses on their loans. An insurance company hopes for no unusual events such as hurricanes or earthquakes. When the economy is in recession or natural disasters occur, losses are taken that could overwhelm reserves if not adequately prepared for.

What Happened in Early February?

The sustained run of gradually increasing US stock prices was broken in late January and early February. The volatility index (VIX) for the S&P 500, which tracks the cost of purchasing short term put and call options, had been trading in a band of 9 to 15 for almost all of 2017 and early 2018. As stocks sold off heavily on February 5th it spiked from 17 to over 50. For securities like XIV, that aim to deliver a return that is inverse to the change in the VIX, a VIX spike of over 100% implies a complete loss of capital.

Bloomberg compiled a list of sixteen volatility linked securities that were suspended from trading as a result. The biggest casualty was XIV, which saw its net assets per security plunge from $115 to $4 in a day. Credit Suisse, the manager of XIV, elected to liquidate the remaining assets. The second biggest security, SVXY also suffered huge losses but has continued to trade and has seen substantial new inflows since XIV’s closure was announced.

The timing of the spike in the VIX wasn’t predicted but many including myself had said it would eventually happen. The dramatic increase in the herd of amateur investors speculating on continued low volatility via XIV and similar products increased the possibility of a rapid spike in volatility. With VIX often below 10 recently, a doubling would only have brought it back to around the long term average of 20 and well below the peak of 81 in 2008.

Can this Happen Again?

Yes – it will happen again. However, I can’t tell you whether it will be 10 days or 10 years before the next time VIX doubles in a day. Like hurricanes, there are certain conditions that increase the likelihood but there’s no way to predict the timing and severity of the damage well ahead of time.

Doesn’t this Inevitably of Loss Make Investing in Products Like XIV Stupid?

If you treated XIV like an ordinary stock you were guaranteed to eventually suffer a catastrophic loss on it. A buy and hold strategy is a completely inappropriate way to approach short volatility investing. Risk management techniques like those used by high yield debt managers and insurance companies are needed to properly manage short volatility strategies. Rather than focusing on upside potential, short volatility investing requires a focus on downside protection. An understanding of the probabilities will help here, I’ve used simplified maths to keep it comprehensible.

The graph below shows that XIV started at $9.57 in November 2010, peaked at $145 in January 2018 and closed at $99 the day before the crash. This equates to an average daily compounding return of 0.129% over the 1,808 days before it experienced its catastrophic loss. 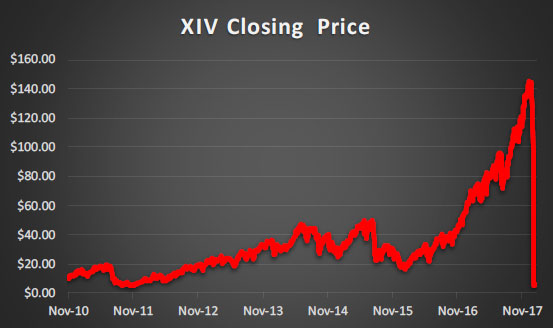 The historical data for XIV was an average daily gain of 0.077%, which compounds to a 21.2% return over a year. That beats every mainstream asset class by a large margin. Another way to think about it is it takes an average of 538 days to double the investment but the wipe-out only comes every 1,808 days. Note that this is a dramatically simplified version of reality and relies on a relatively short period of historical data. The future could contain several catastrophic losses in the next year or none for 20 years.

How Should the Risk of Catastrophic Loss be Managed?

The story of amateur investor who turned $50,000 into $4 million before losing it all shows exactly what not to do. Firstly, short volatility strategies should be a small part of a diversified portfolio. For a typical institutional client that would mean 1% or less. Secondly, gains should be harvested and reinvested into other asset classes. The trigger might be gains of 20% or 50%, but once the position has materially increased it should be reduced back to the original level.

Thirdly, there are going to be times when a less than usual allocation is appropriate. If the VIX is below 15 an investor might reduce their standard holding position and if it goes below 10 it might trigger a complete sell down. Contrarian investors would be waiting until the VIX is above 25 before investing. Fourthly, there needs to be an ability and a willingness to immediately reinvest after a large loss. Losses must be expected with investors ready to use gains previously harvested. The picture below from The Macro Tourist sums this point up so well. How Would Short Volatility Strategies Fit into a Diversified Portfolio?

Short volatility strategies are high beta and highly correlated to equities. That points to them being included as part of the equity allocation. Some capital allocators might include them in growth or alternative investment categories.

Is this all a Sales Pitch to get Investors for Your Fund?

No – I’m too much of a chicken to manage outright short volatility strategies. I’ll stick to managing Australian credit. The only recommendation I can make about managers is to avoid this hedge fund that has lost 60% so far in February after posting modest returns on their option strategies in the previous nine years. There’s no place for a manager that captures limited upside but most of the downside.