There have been plenty of recent articles about high risk areas of lending which have had strong growth in recent years and now have the potential to suffer substantial declines. Sectors highlighted as having dubious credit quality include US high yield bonds and leveraged loans, European and Japanese sovereign debt, European and Chinese banks, emerging market bonds, margin loans, coco securities, subprime auto loans, student loans, CLOs and Chinese shadow banking. In isolation these can seem like small problems, but is there a wider issue at play that could drive investment returns in the coming years? This article discusses the findings from three recent seminal papers. Together these papers highlights the growing global misuse of debt and considers the consequences of that for future investment returns and economic growth.

There are times when what could be a fairly dry academic document turns out to be full of insightful observations that help to explain what’s actually happening. The Geneva Report is one of those documents. The primary graph that has been widely copied is below, but the 125 pages contain much more than one key point. As the key graph shows, the thesis that the world has been going through a period of deleveraging following the financial crisis is completely false. The low levels of GDP growth aren’t explained by deleveraging. Rather, low levels of growth have occurred despite a substantial increase in leverage. This expansion in leverage is consistent across developed and emerging economies. The report analyses many countries, breaking down total debt to GDP ratios into households, businesses, financials and governments. There is a surprising level of variance amongst each country in developed markets. Japan, Greece, Italy, Portugal and Ireland have very high levels of government debt. Belgium, Sweden and Spain standout for their high levels of business debt.  The Netherlands, Australia and Ireland have high levels of household debt. If a bout of global deleveraging was to occur, this data points to very different sectoral impacts for each country.

In emerging markets Hungary, India and Brazil are carrying the highest levels of government debt. China, Hungary and Thailand have the largest exposures from the private (businesses and households) sector. The most interesting story from emerging markets though is that the growth in debt in the last five years is almost all about China. 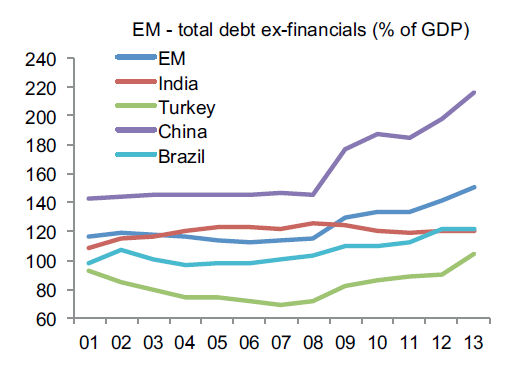 As well as showing which sectors in each economy have the most debt, the report shows which countries are the most indebted to other countries (external debt). Portugal, Greece, Ireland, Spain and Australia ranked highest on this measure amongst developed countries. Hungary, Poland, Turkey and Czech Republic are highest in emerging markets. In crises in South America and Asia in the last forty years, a key trigger has been overseas investors losing confidence and withdrawing their capital. If the external debt hasn’t been productively invested with ongoing profits available to service the debt, the countries listed above run the risk of seeing large amounts of capital withdrawn from their economies. This withdrawal of capital almost certainly results in a period of recession. The flipside of the coin is Japan, the largest external creditor nation. Despite its extremely high levels of government debt, from substantial and sustained budget deficits, Japan has not seen a collapse as it is only reliant upon the confidence of Japanese investors.

The Geneva Report raises several obvious questions that are very difficult to answer. If there hadn’t been growth in debt levels since 2008 how much worse would the financial crisis have been? If China hadn’t gone on an enormous debt binge in the last five years would its GDP growth rates have collapsed? If there is another financial crisis, which governments would have no ability to issue more debt to fund spending in an attempt to offset a pullback in private sector spending? Is it possible that investors could suffer indigestion after gorging on debt for so many years? There are no easy answers, but these questions all point to the possibility that a future which includes global deleveraging might look more like the great depression than the great recession.

Traditional economic theory has households as net savers, businesses as net borrowers and banks as intermediaries between the two groups. The result is that households earn a return on their excess savings and businesses borrow and invest which increases economic output and employment. This paper puts aside the traditional view of how credit operates showing that (1) banks are becoming an ever larger part of the economy (financialization) and (2) their lending is increasingly skewed towards property based (mortgage) lending. The chart below illustrates both these conclusions. 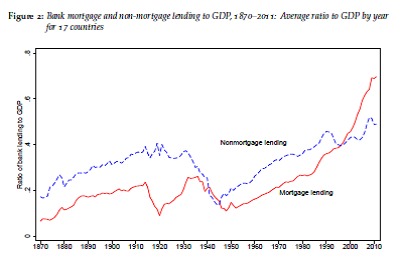 The paper goes on to show that the growth in credit by banks over the 50 year period from 1960 to 2010 was disproportionately to households for mortgage activities. Spain, Denmark, Australia and Great Britain are all highlighted for above average growth in bank lending to households for mortgages. Spain, Denmark and Great Britain saw a material downward movement in their house prices following the onset of the financial crisis, but Australia hasn’t seen much of an impact. The US saw an increase in the overall debt to house valuation level (commonly called LVR or LTV) from 30% to 50% from 2000 to 2010, another case of massive growth in credit followed by a similarly massive bust.

It would be easy to write-off the European Bank Stress test as more of a tickle test than a stress test but there are some worthwhile points amongst the shortcomings. Firstly, the exercise provided a largely standardised application of regulatory rules. This helps analysts substantially as there is a fairer way to compare banks within the Eurozone when national regulators are allowing vastly different rules and calculations.

Secondly, there’s been an attempt to bring out some of the skeletons in the closet with the results highlighting banks that have been gaming the rules and pretending that certain losses haven’t really occurred. The headline results as per the executive summary ignore much of this skeleton exposure. However the main report shows two grey shaded columns on pages 41 to 45 that give a reasonable guide to who is cooking the books. These grey columns have negative common equity tier one (CET1) ratios for two banks in Cyprus, three in Greece, two in Ireland, two in Italy and one in Portugal after applying the regulator’s scenario and correcting some of the disguised losses.

The list of short comings is long but the major items are:

The politics of this process clearly played an important part in the outcome. The European Banking Authority had to work with the national regulators and the banks themselves to make this process happen. This would not have been an easy task with extraordinary amounts of lobbying from many vested interests. Clearly this, along with fears that a bad outcome would undermine confidence, has decreased the severity of the assumptions applied.

The two previous rounds of stress testing gave a pass mark to Irish banks and Dexia, who subsequently required bailouts within twelve months after the results were published. I think this round has done a better job of identifying the weakest links in the European banking system, particularly those banks who haven’t cleared the problems from the last financial crisis. However, it provides little confidence that European banks are well placed to deal with another financial crisis.

The three articles together highlight the increasing global dependence on the expansion of leverage to fuel economic growth. Finance has been an ever greater part of developed and emerging market economies such that ordinary people are increasingly impacted (both income and wealth effects) by the ups and downs in credit availability through the cycle. Credit is increasingly being used for property, consumer and speculative investment activities rather than growth generating activities such as productive business investment and necessary infrastructure development.

Many banks, at least in Europe, have yet to clear the problems from the previous crisis. Whilst low interest rates provide some assistance, they have predominantly led to speculative lending and investment and have rarely delivered the desired lift in growth rates or inflation rates. Those who have in the past laughed at the suggestion that Europe or the US could become the next Japan have now stopped laughing with low interest rates increasingly being seen as part of the long term landscape. China is also showing signs of buckling under its rapidly increasing debt load.

For investors it’s a good time to reflect on the ability of every asset in their portfolio to withstand a major global economic shock. By and large, asset prices are high and there are many buyers for almost any security with good yield or even the prospect of a good yield in the future. For credit investments, it’s time to decrease credit risk and credit duration, and to increase structural protections. Most investors are currently doing the opposite of these things, as they see the drop in yield to potentially sub-inflation levels as unacceptable even if it is only temporary. For the contrarians among us therein lies the opportunity to be positioned with cash available, waiting for some of the high risk investments to inevitably unravel in the medium term.